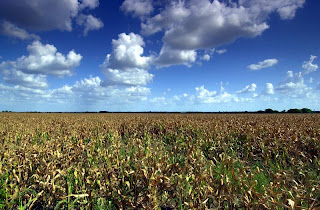 Current debate on sustainability and global warming relates to green house gases emissions. Those experts with vested interest to potray negatively on targeted industries are devising and manupulating various formulae and asssumptions to potray undesirable carbon emmission figures for their targeted industry while carefully ajusting to ensure their national industries competing in the related industries are not affected. Palm oil industry has been facing this manupulative expert data for sometime now in the EU and USA.

One simple approach used is to arbitarily establish a cut-off date in counting the start of carbon emission. The RSPO wanted the cut-off year to be 2005. The EU is proposing 2007. Both dates will exclude the agricultural areas of the EU or USA from having a carbon debt based on the removal of the original forest on the land before it was turned into agriculture. Competing crops from these countries in the form of rapeseed or soya will have a head start in their comparison with palm oil when relating to their carbon emission numbers.

I would propose that all land when turned into agricultural use will carry a carbon emmission debt based on the original forest that was cleared. The cleared forest which acted as a carbon sink had released carbon dioxide to the atmosphere. If the land is reforested the carbon debt is repaid. Developed countries can opt to reforest their converted land rather than ask developing countries to sacrifice development through no deforestation.

This recognition of a past carbon debt on every hectare of land under agriculture is a fairer basis as the starting point for calculating carbon emission numbers of various crops. If I have some support on this idea, it may be worthwhile to push it as a standard for international adoption.