Delegated Act: Indonesia and Malaysia steps up to the plate with higher domestic biodiesel mandates – Part 2

Malaysian Prime Minister Tun Dr Mahathir Mohamad referred to the Delegated Act as a misguided policy designed to protect the agricultural industries of a few member states in an opinion column on 19th August in Bloomberg.

He opined that beef production for example in Latin America represents by far the world’s biggest cause of deforestation.

According to Dutch forest non-governmental organisation Fern, in a 2018 Policy brief titled Agricultural commodity consumption in the EU, beef production is the main driver of deforestation more than soy and palm oil combined.

Fern noted that in seven countries with high deforestation, in 2011, forest conversion to cattle pasture was responsible for nearly 60 per cent of forest loss linked to agriculture in terms of land area (mostly in Brazil). The forest lost to ranching was double that of the combined deforestation associated with soy, palm oil and timber. 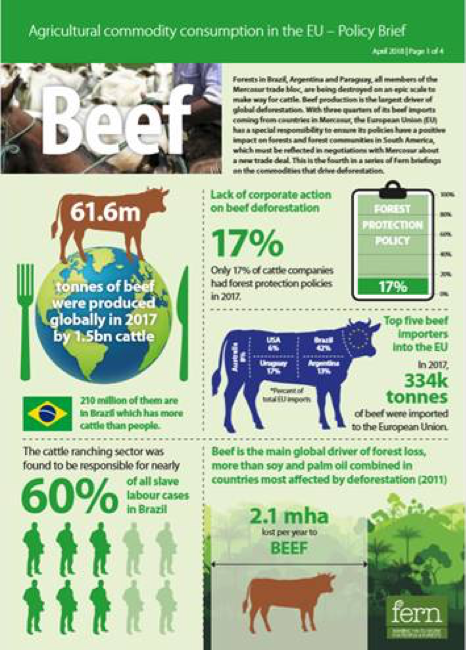 According to the Economist, The Amazon basin, most of which is situated within the borders of Brazil, contains 40% of the world’s tropical forests and accounts for 10-15% of the biodiversity of Earth’s continent.

Brazil lost nearly a billion trees due to deforestation between August 2017 and July 2018 (7,900sqkm of Amazon forest). 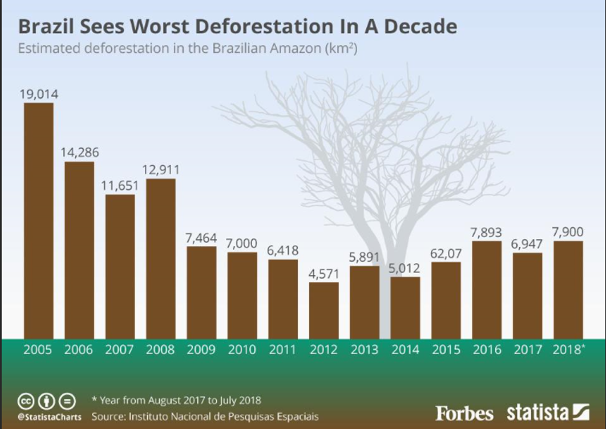 Brazil is also both the world’s biggest beef exporter and largest soy producer.

The USDA projects that Brazil will harvest 124 million tons of soybean for 2019/20, while soybean acreage is expected to increase to 37 mil ha.  It is estimated that 80% of soybean meal, a by-product of soybean is used for animal feed worldwide.

The World Resources Report, 2018 projects consumption of animal-based foods to rise 68 % between 2010 and 2050, with an 88 % increase in consumption of ruminant meat (meat from cattle, sheep, and goats). 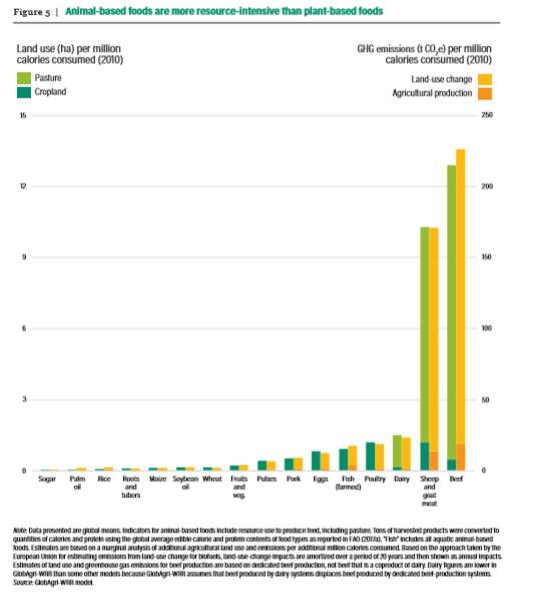 Coming back to palm oil which continues to face debate and claims against the crop on deforestation, producers must address to remove the fear mongering about palm biodiesel which has led to the food vs fuel debate.

Public fears must be appeased as many, including policymakers, are under the impression that palm oil producers are planting oil palm for the sole purpose of biodiesel use.

The oil palm has always been a multipurpose crop that can be used for both food, feed, fuel and many other purposes.

Food is the most important priority but there has also been a demand for fuel to substitute the depleting petroleum-based fuels to tackle greenhouse gas emissions.

For producers, they are only exercising the right options as dictated by demand while farmers find biodiesel help to diversify their income basket as they can earn a higher economic return from their land.

It is imperative to debunk the link on deforestation and biodiesel causing food shortages and raising the cost of food. Shortages in food can occur due to many reasons such as prolonged drought or diseases that affect yield and productivity.

To increase future food supply, farmers who produce agricultural crops need to make profit without which they will look at other possible source of income.

At the Rio Earth Summit in 1992, the pledge made by the Malaysian Prime Minister Tun Dr Mahathir to maintain at least 50 percent of Malaysia’s land mass under forest cover remains till today.

At the inauguration of “Hutan Kita – Journey Through Our Rainforest”  exhibition on 23rd August in Kuala Lumpur, which showcases the country’s rich biodiversity in the forests,  the Prime Minister reiterated that Malaysia’s forest cover currently at 55.3% or 18.28 million hectares of our total land area, exceeds Malaysia’s initial commitment made in the Rio Earth Summit.

This he said was even far higher than that of most large European countries including France, Germany, Italy and the United Kingdom.

The Prime Minister added that the Malaysian Government has set the maximum arable land for oil palm cultivation at 6.55 million hectares by 2023.

The agriculture sector and palm oil will continue to feed the people.

The OECD projects that roughly two billion people derive their livelihoods from agriculture.

Many of the world’s poorest people will continue to live in rural areas and will depend on agriculture to generate income.

For the poor farmers, it is the economic returns derived from his farm that matters most. Policies that curb such efforts will only harm this group of people in the long term.

While trade between EU Member States is tariff free, Brexit could result in higher trade barriers, which would affect agricultural prices and production in the UK and the EU.

The palm oil sector should already plan to explore more business opportunities in the UK which has been a traditional trading partner for Malaysia, while the UK may explore better trading links with ASEAN partners to ensure new markets can be developed and cultivated for the county’s agricultural exports.

Sustainable palm oil should continue to be featured and marketed by all producers.

To ensure our forests remain protected, it is only appropriate for countries that have the capacity to act as the world’s lungs, be compensated so that funds can be channeled to better manage forests.

Similar to water, clean air may become a much sought after and critical commodity someday.  It won’t be long before countries may even consider imposing a tax on those who wish to enjoy fresh air in their green lungs.    The tax collected can then be channeled to up keep and protect the forests.

After all, as rightly mentioned by the Prime Minister of Malaysia, “The forest is our shared heritage. It is also our shared responsibility. Conserving it will require our collective and sustained efforts, be it individuals, governments, academicians, the private sector, the media, indigenous and local communities as well as international organisations.  To enable greater implementation of forest conservation as well as overcoming the gaps and constraints faced, adequate and substantial technical and financial resources are needed for its success”.

Belvinder Sron is the Deputy CEO of MPOC.