A Force for Good : Malaysian palm oil has changed the world 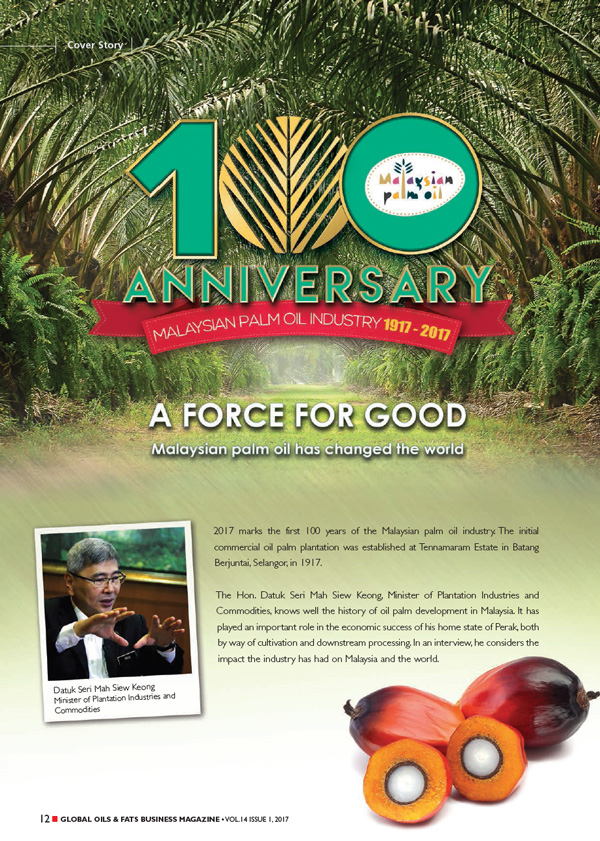 2017 marks the first 100 years of the Malaysian palm oil industry. The initial commercial oil palm plantation was established at Tennamaram Estate in Batang Berjuntai, Selangor, in 1917. The Hon. Datuk Seri Mah Siew Keong, Minister of Plantation Industries and Commodities, knows well the history of oil palm development in Malaysia. It has played an important role in the economic success of his home state of Perak, both by way of cultivation and downstream processing. In an interview, he considers the impact the industry has had on Malaysia and the world.

Malaysian palm oil has come far to become a successful commodity. Would the planters of 1917 have been amazed by the state of the industry today?

I think they would be amazed by what Malaysia – not just its palm oil industry – has achieved. So much has changed over 100 years. We were not even an independent nation in 1917. It is a testament to the brilliance and foresight of the palm oil community that it has remained a constant success and a force for good throughout the historical, technological and political changes of the past century. It is a truly remarkable achievement.

I am sure the founders of Tennamaram Estate would recognise one thing about the modern industry – that the commodity and its fundamentals remain the same: a high-yielding, cost-effective, versatile oil that is far superior to any competing oil. In Malaysia we have turbo-charged those fundamentals with world-class R&D; cutting-edge agricultural techniques; and a strong commitment to responsible and socially beneficial planting.