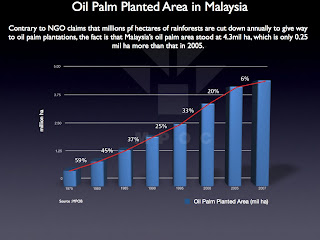 For a tropical country such as Malaysia, every inch of land would be under forest or would have been under forest cover sometime in the past. I am always willing to acknowledge that all our agricultural activities, our industrial land, our towns, cities, highways and airports have replaced forests and have affected biodiversity or have released green house gases to the atmosphere . Every country has sacrificed some of their land for agricultural and other uses over the years when they undergo the process of development. Some use their land extensively for agriculture, others don’t. Others have not yet the time or the funds to develop their land, as is the case with many developing countries.

Current debate by some NGOs is tending to link agricultural activities with deforestation. To have a healthy debate, there must be some definitions. For example, what percentage of our country’s land area is allowed for agriculture, and what percentage should be conserved as forests. Would this percentage be uniform as an international benchmark, or should it be different for developed countries as compared to developing countries. If it is different who is to determine what is the right percentage, especially for those developing countries which since achieving independence from their colonial masters have not been able to develop their land for agriculture.

Why don’t we set up an international standard for the percentage of agricultural land allowed for each country. Let us start with a range of 30 to 50 % allowed for conversion to agriculture. In terms of carbon footprint, related to global warming, those countries keen to comply with the target and bring their agricultural land ratio to below 50% can reforest their land accordingly. Those countries still having less than 50 % of their land under agriculture can be allowed to develop according to their development needs. In times of food shortage, it is important to expand food production by making land available for agriculture. If 50% of arable land is allowed for agriculture and up to 50 % left as forest, there will be a fair balance for wildlife habitats and human food production capacity.

It will be good if the NGOs provide leadership in coming out with the guidelines. Otherwise, we argue on different assumptions and understanding on what constitute deforestation. Some even post personal criticisms from such misunderstanding. It is important to have an open debate. In our recent sustainability conference, I raised a few bold ideas in front of 500 attendees, but no one was bold enough to challenge my statements. Later some criticisms were raised in the NGOs websites. So much for being bold or otherwise.