Palm Oil Demand Up in Turkey

Turkey is showing all the signs of becoming a high-potential market for oils and fats. Consumption growth and the population size have both been expanding over the last 20 years, at a change in annual growth rate of 2.42% and 1.32% respectively. The gap between these factors has also narrowed (Figure 1). 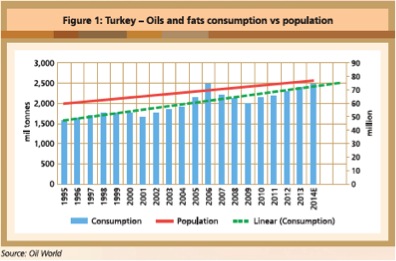 Per capita consumption of oils and fats was recorded at 32kg in 2013, or 5kg more than the global average then. Consumption was estimated to be around 2.48 million tonnes in 2014, higher by almost 75,000 tonnes compared to 2013.

Palm oil and sunflower oil are the two most consumed in oils in Turkey, together holding more than 80% of the market share. Figure 3 compares their average prices at ports in June 2014 and May 2015. The price covers import duty of 36% plus a charge of US$15 per tonne on sunflower oil; and 31.2% import duty on palm oil. Locally produced sunflower oil is priced higher so that it is more competitive; and the government provides a subsidy of US$110 per tonne. 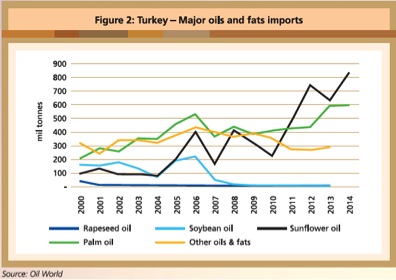 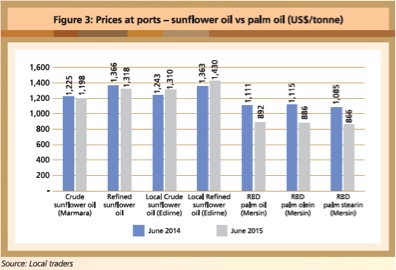 Palm oil dominated 81% of the margarine market intended for local consumption and 78% of the export market in 2013 (Table 1). Currently, palm oil is not used in the liquid oil market for local needs. In 2013, consumption of liquid oil stood at 983,000 tonnes for local use and 618,000 tonnes for the export market. Hence, there are opportunities for palm oil in this sector, especially for blended palm cooking oil.

Imports of the three major oils increased by 54,552 tonnes from January to March this year, compared to the same quarter last year (Table 2). Intake of palm oil rose by about 9,000 tonnes over this period.

Malaysian palm oil already held 58% of the palm oil market share as at March this year (Table 3), compared to about 38% for the whole of 2014. It is likely to be more competitive under the Malaysia- Turkey Free Trade Agreement, expected to be implemented in the next few months. This will reduce import duty on Malaysian palm oil by about 10% and further boost its price competitiveness.